Every year hundreds of people visit High Park in the spring to see the ornamental Sakura Cherry trees blooming. This year I decided to make an effort to go and with no full time 9-5 job in my future I decided a Tuesday morning would be a safe time to avoid the crowds. A few members of the Brampton Photo Group were able to accompany me on this outing. We aimed to be there about 8am to beat a little of the traffic and get some good light. Little did we know that the street would be under construction meaning we would need to find another entry point to the park. When we finally made it into the park a little later than anticipated we were surprised to find a small crowd around the trees. With some patience I was able to get some shots without any people in them.

Most of us split up and tried to tackle different areas of the park and at one point I ended up in the Japanese garden just beyond the Sakura trees.

Before long I was back with some of the members of the group and eventually found myself lying flat on my back beneath one of the larger trees to take the shot below. 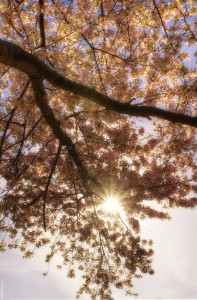 I wanted to discover more of the park so I decided to search for some wood ducks that I had seen on an earlier trip. As I reached the south end of Grenadier pond I found a couple swimming close to the trail.

A very successful outing and one I can finally tick off my to-do list.