After our visit to Trakošcan we stopped in at the old baroque city of Varaždin. Once the capital of Croatia it was almost destroyed in a fire in 1446. Its baroque buildings were spared but the capital was moved to Zagreb. Varaždin is home to another beautiful castle and this one is now the Civic Museum which houses weapons, furniture, porcelain and a pharmacy, all from the 18th century. 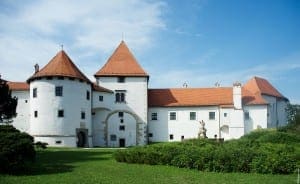 We were unable to go inside as the museum is closed Sundays so we continued to explore the city. The heart of the town is Tomislav square where the Town Hall, one of the oldest buildings in the city, resides. The majority of the square is mostly filled with small cafes for those visiting to sit a spell and enjoy the view.

Wandering around I saw amazing architecture, as is to be expected when one visits Europe. Our final stop before getting into the car and heading home was the National Theatre. 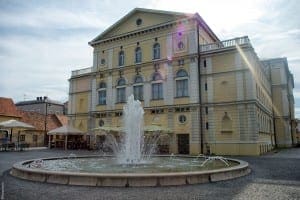 Built in 1873, it is the main cultural centre in the city. Many theatre-goers from all over Europe find their way here to enjoy performances in the summer and autumn.