The Summer Homes of Sintra: Part 3

My final destination in Sintra was Quinta da Regaliera, a very interesting estate just outside the historic center of Sintra. As you walk uphill (yup that’s right, uphill – again) to the entrance you pass the grand 5-story gothic palace, giving a glimpse of what might lie in the grounds themselves.

Antonio Augusto Carvalho Monterio, an eccentric millionaire, was the brainchild behind this particular estate. The grounds are riddled with secret passage and tunnels along with occult symbols and religious references.

I started slow with this water fountain. The strange fish acts as the spout for the water to flow into the two-tiered bowls. 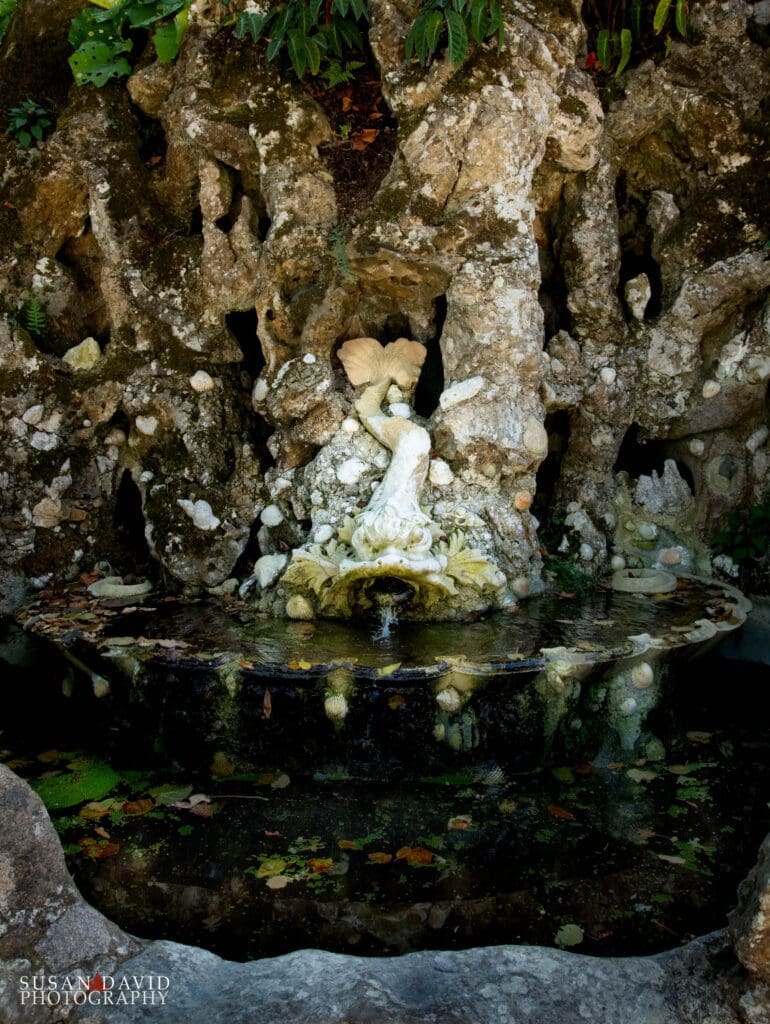 The grounds themselves are a challenge to navigate as they twist and turn and head off into unexpected directions or dead ends. Needless to say, I definitely walked the same paths a couple of times if not more.

The one place I was looking most forward to was the Initiatic Well. My friend, Jason told me all about it, which is why I choose Quinta da Regaleira as my final destination of the day. The well did not disappoint. Entering from the top I walked down the ten stories to the bottom where it opens up to the tunnels. There is a second smaller well on the property. The wells were used for ceremonial purposes that included Tarot initiation rites. The tunnels connect the wells to one another, in addition to various caves and other monuments located around the park. 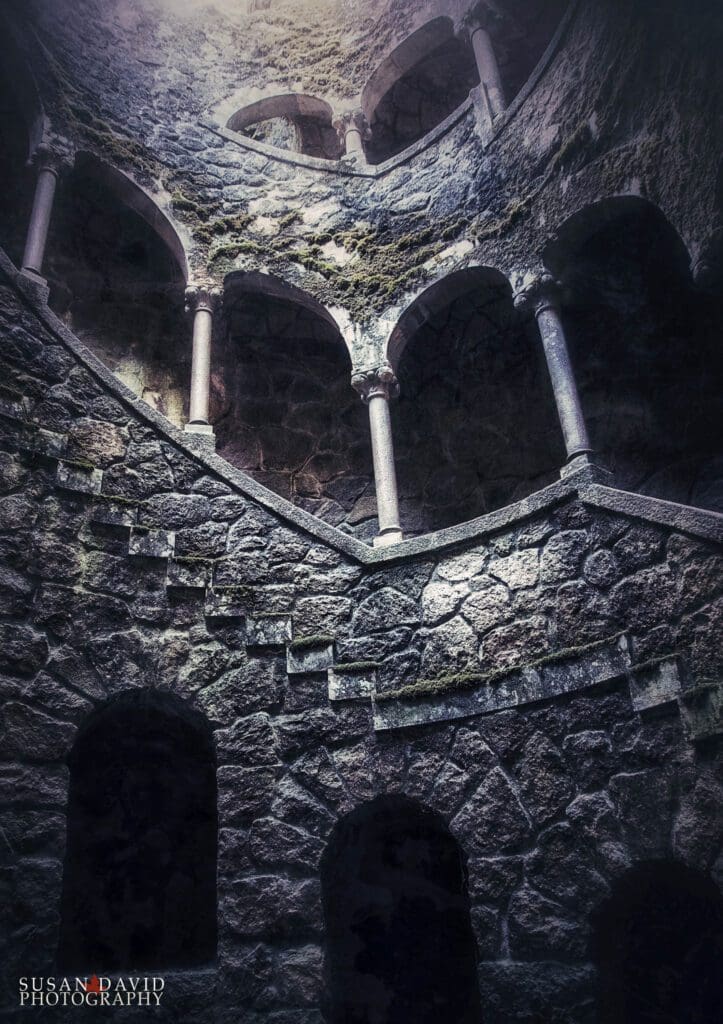 Part of the cave system on the property is the Laybrinthic Grotto. For these tunnels, you will need a light source in order to get around because once you leave the cave opening there are no lights to guide you as there are in the tunnels near the Initiatic Well. 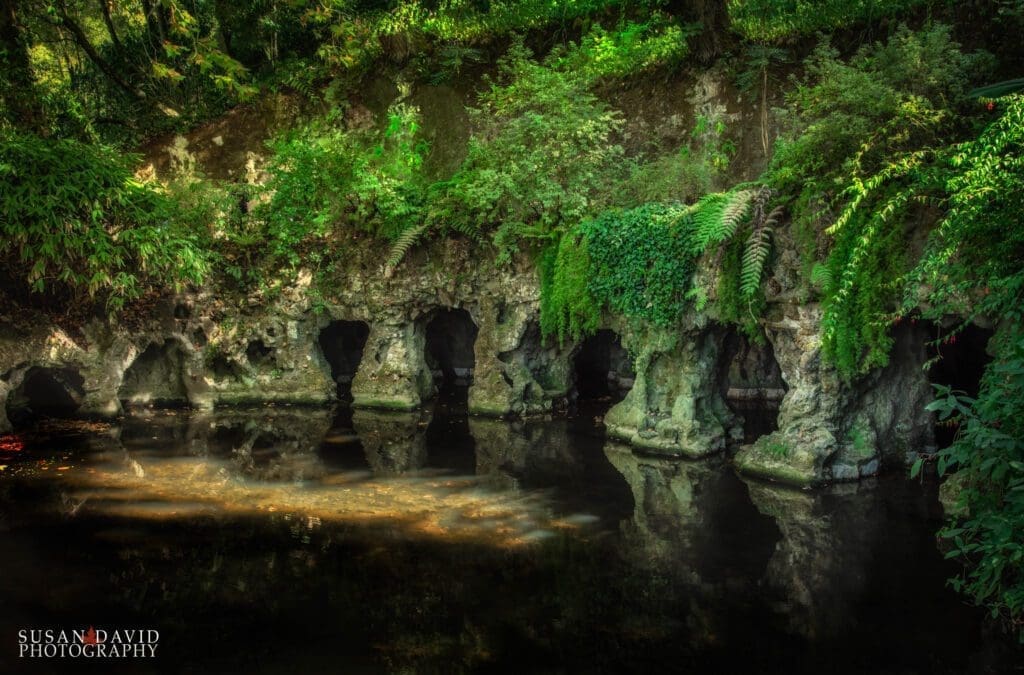 There is so much here in Quinta da Regaliera to see that you should plan to spend a few hours here if you can. I spent most of my time here at this estate more than the other two (Pena Palace and Moorish Castle) and I wish I had more time and energy. If I get a chance to get back I will be coming here first.

A short hike (downhill – luckily) from Pena Palace and Park is the Castelo dos Mouros (Moorish Castle). Even though I walked downhill to the castle you’ll notice in the photo below that it definitely looks more uphill than down. And if you look at the final image from the previous post you will notice that technically the castle is downhill from Pena. They just don’t tell you that it sits on another peak so you have to walk down and then back up to get to its entrance. Still its a great view from the trail as you look up at those castle walls. (Hey, I’m storming a castle…lol) 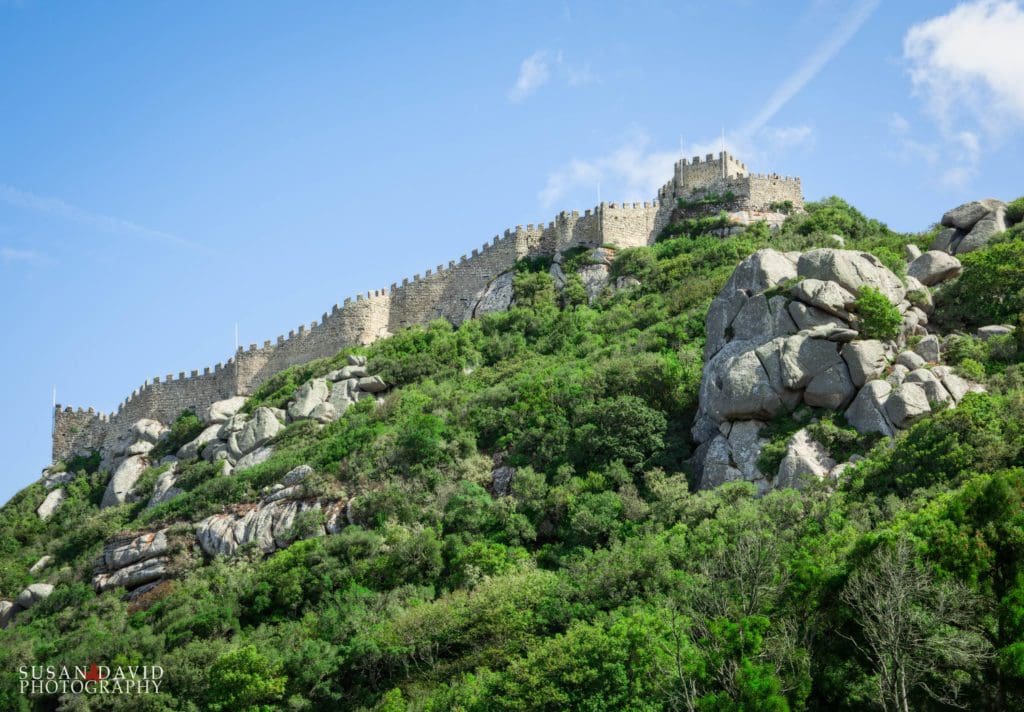 I’m convinced that the grounds and walls of the Moorish Castle are a form of torture with all the ups and downs and then ups again. This is not a place for the weak. I’m also lucky that the temps today dipped from 30ºC + to only about 22ºC. I don’t think I would have made it. Or if I did I would have been done for the rest of the day. Below is the view from one side of the castle walls to the other. What did I tell you? Ups and downs. Like a damn roller coaster except you have to walk.

From One Wall to Another

A little history: the castle was built in the 8th and 9th centuries and was conquered in 1147 by Alfonso Henriques. It fell to ruin after the 1755 Lisbon earthquake but eventually it’s restoration, by King Ferdinand II, began in the 19th century and continued into the 20th century. Today It is classified as a National Monument, part of the Sintra Cultural Landscape, a UNESCO World Heritage Site. 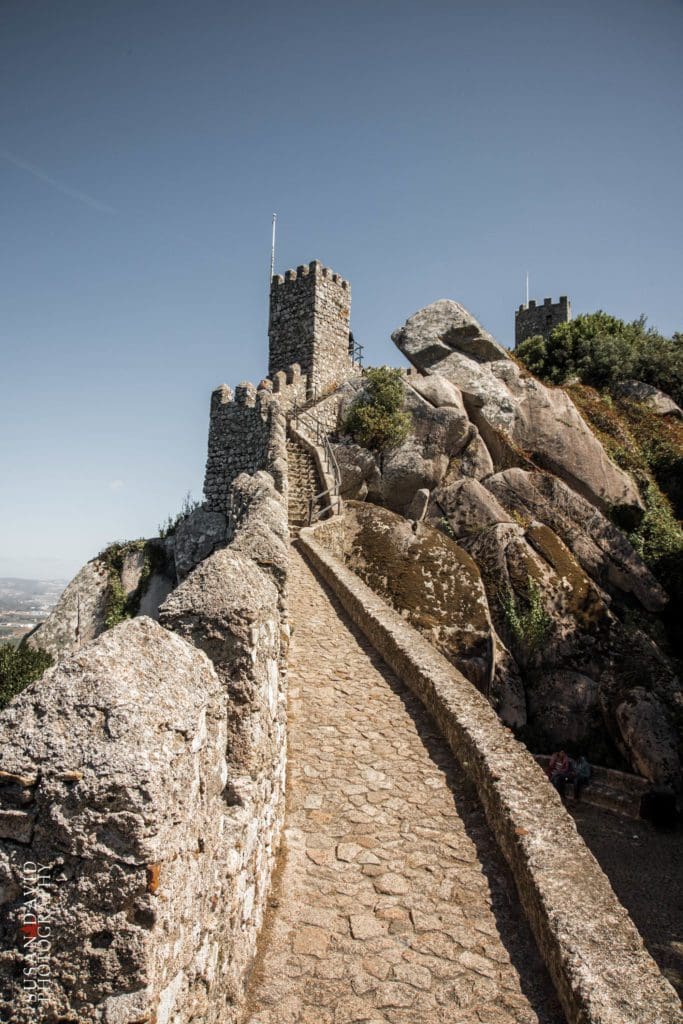 The castle walls are quite narrow. You could easily knock someone off. Which would not be so pleasant as you would fall a couple stories down onto hard rock. And that’s the good scenario because falling out of the castle would be a far steeper drop to your death.

When you exit from the castle you have a choice to either go back out to the main road to pick up the bus or if you take a path to the left you can exit the grounds and walk straight back (downhill) into the historical centre of Sintra. I took the path leading straight into town, away from the tourist buses. This also allowed me to see some of the back streets of the town. 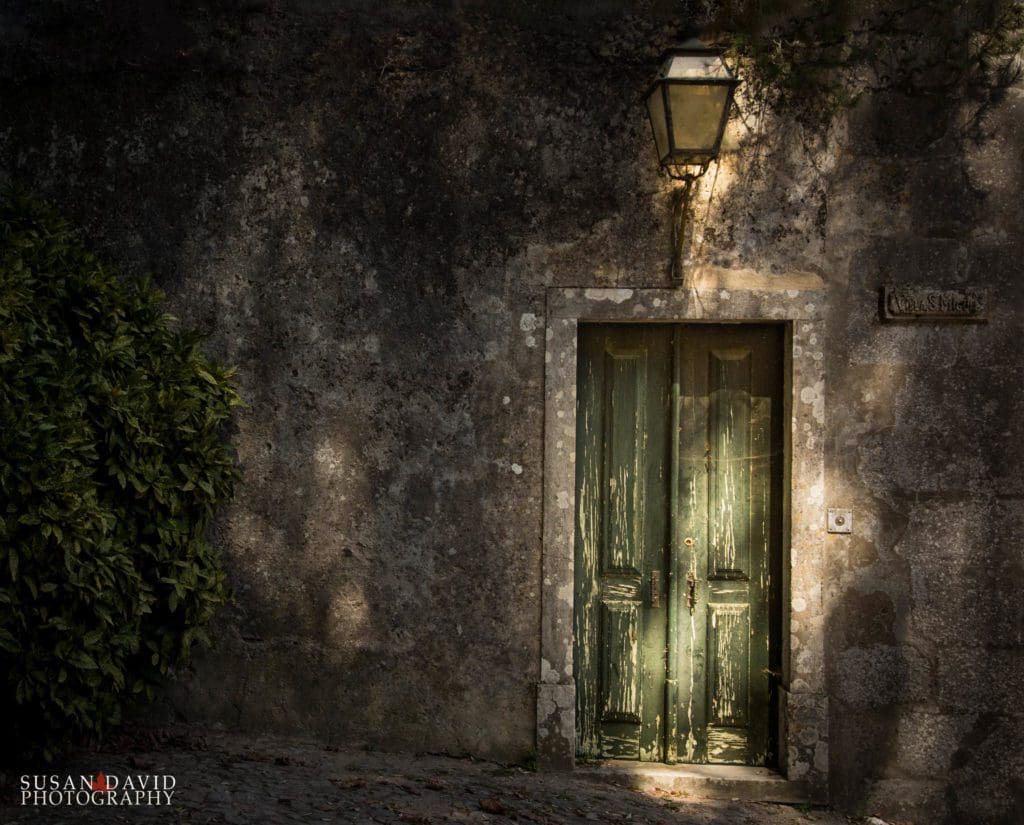 At the bottom of the hill I found this doorway. I have a weird fascination with doors, particularly old ones. It’s like they want to tell a story. I wish I spoke door.

Continuing the walk into town (more downhill btw) I tried to figure out my way to Quinta da Regaleira. In the end I had to stop in at the information centre to ask where the heck I was and how to get to Quinta da Regaleira. (I ended up buying a map.) Seems I would need to walk a little further out of the historic centre and most likely uphill. *sigh

A short train ride away from Lisbon is the city of Sintra. Located on the west side of Portugal, Sintra was once a summer retreat for the kings of Portugal. There is a lot to see and do here and certainly not enough time in the day to do them all. I limited myself to three locations hoping I could tackle them all in the time I had.

When the train pulled into the station I wandered out into the streets to find the local bus that would take me up the hill to Pena Palace. By starting at the top I could walk down to the Moorish castle and then into the heart of Sintra to Quinta da Regaliera. It was best not to look out the windows as these experienced drivers whipped up the hill along narrow, twisty streets. 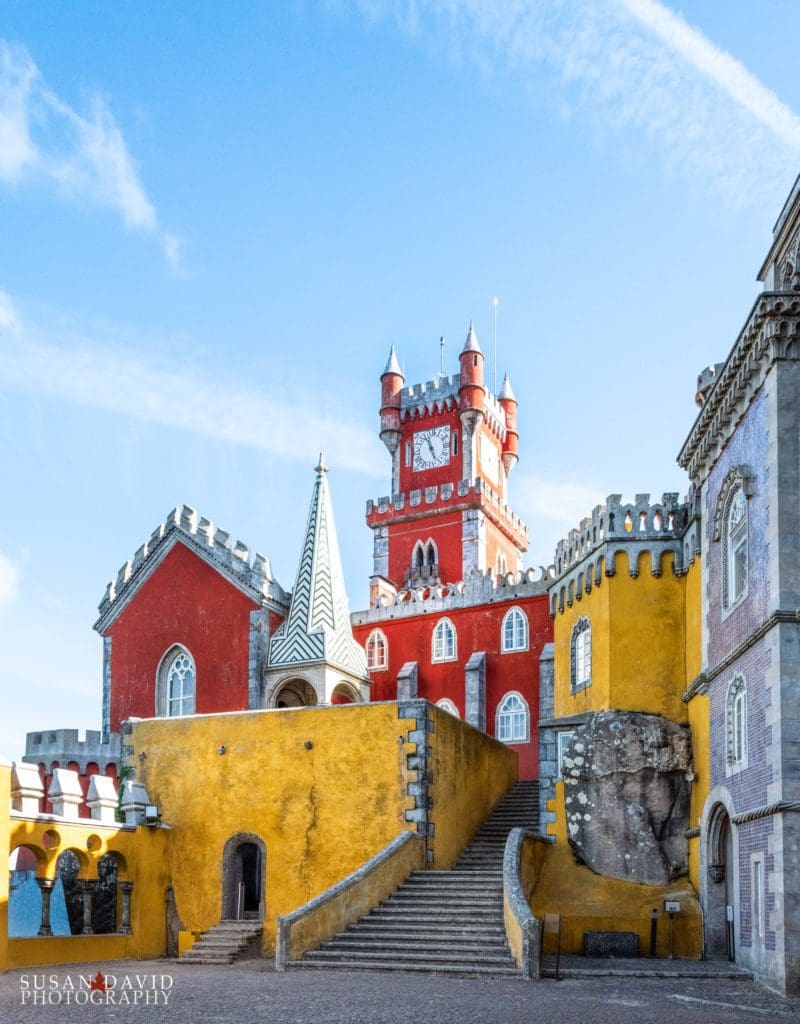 Arriving safely (thank goodness) at Pena the photos I had seen did not do it justice. The unique architecture and colours of Pena Palace and Park are an example of Portuguese Romanitcism. Built in the 19th century it is one of the more popular spots here in Sintra and one can see why. Reds, yellow and blues merge together to create a one-of -a-kind castle. And, of course, the views from this far up ain’t too shabby either. 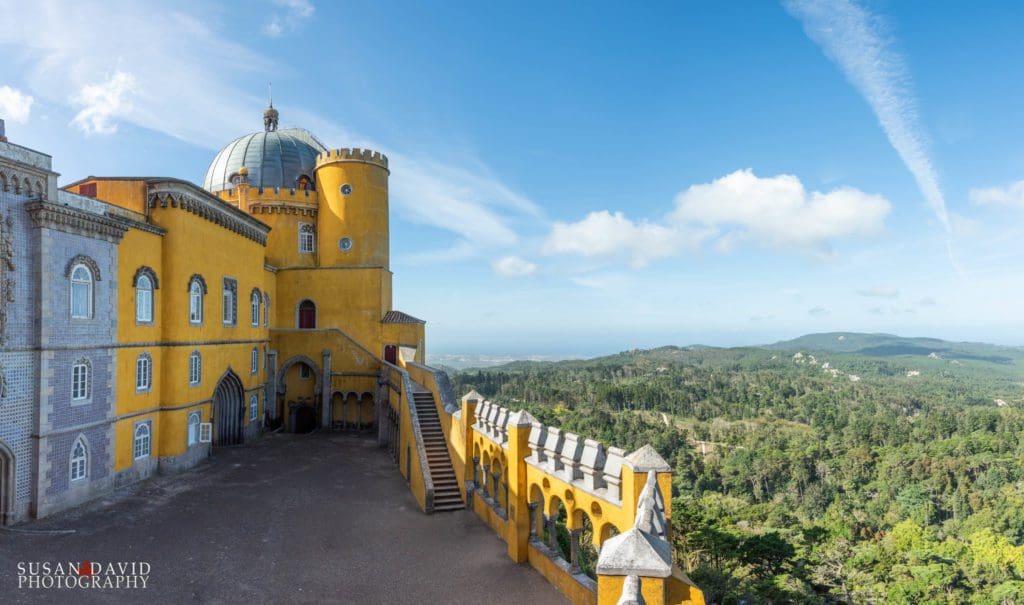 Looking out over Pena

The crowds here were crazy but with a little patience I was able to get a few shots during some of the lulls. From the castle I walked down into the palace grounds. Pena Park, as its known, is very large and unfortunately I did not have enough time to explore much, but I did get some time to see a small portion of it. 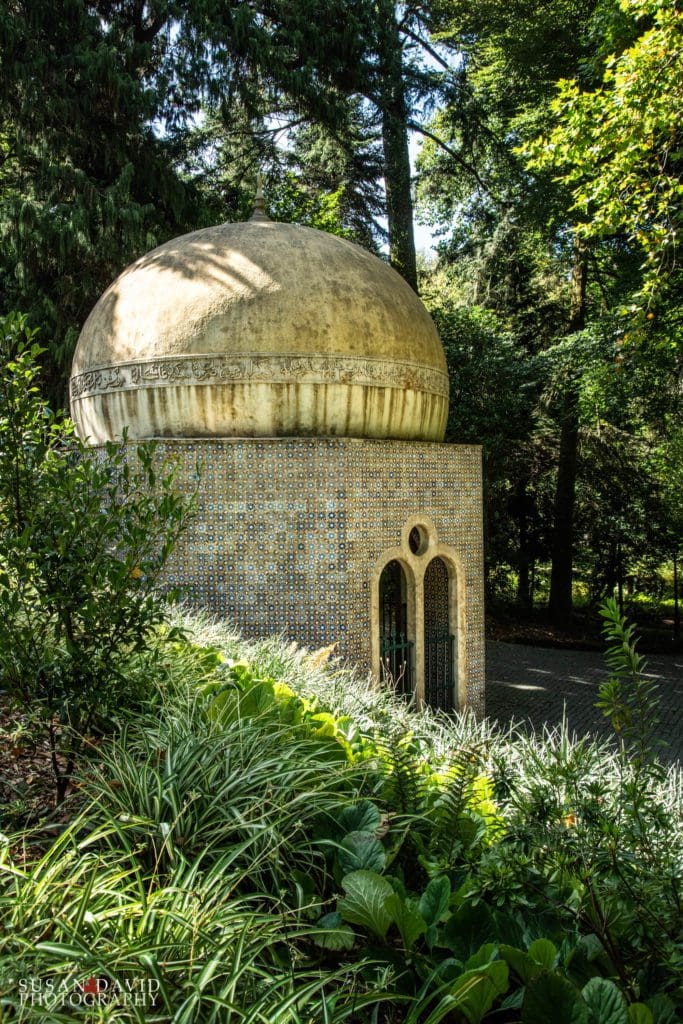 Fountain of the Small Birds

This moorish building is called the Fountain of the Small Birds. Inside its structure is just that, a fountain. As for the small birds I did not see any but I”m sure they visit here during the quiet times. Heading out of the grounds I walked downhill to the Morrish castle. From its walls one can see Pena Palace in the distance. And it is quite a sight. 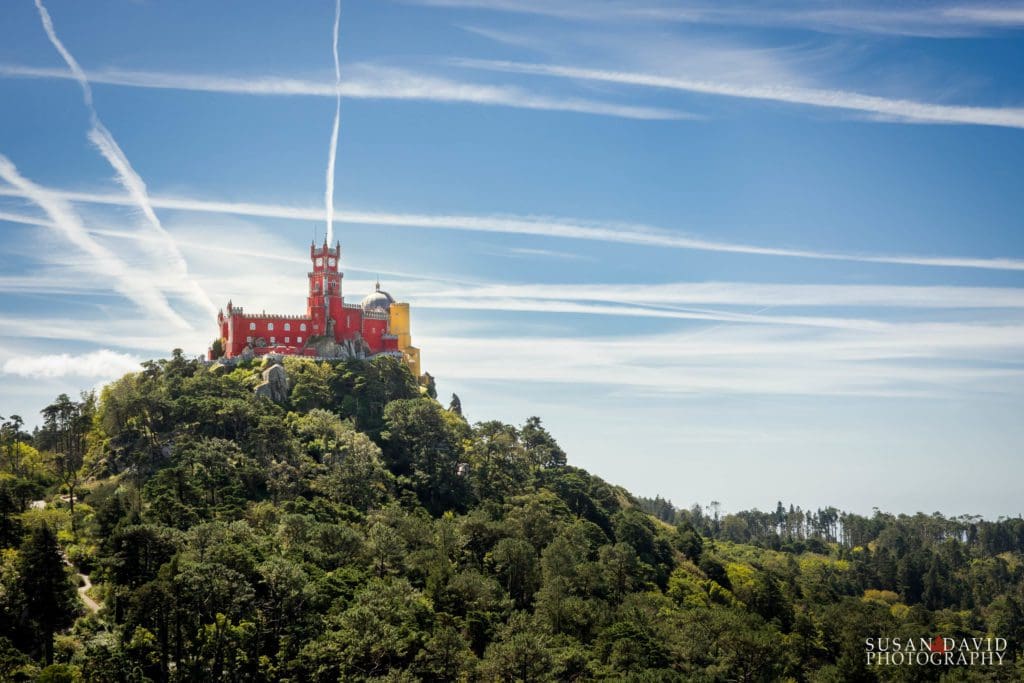 Pena Palace From the Morrish Castle

In my next post I’ll take you through my walk at the Morrish castle.

Sunset at the Castle

Today I spent some time with my friends and got a little shopping done (way too much actually but hey, I’m on vacation). It wasn’t until early evening that I decided to hike back up the mountain to Castelo Sao Jorge to catch the sunset and take some night shots of the city. I got a little lost on the way – I didn’t know exactly where the entrance was and ended up on the opposite side of where I should have gone. Luckily for me I arrived just in time for the sunset. 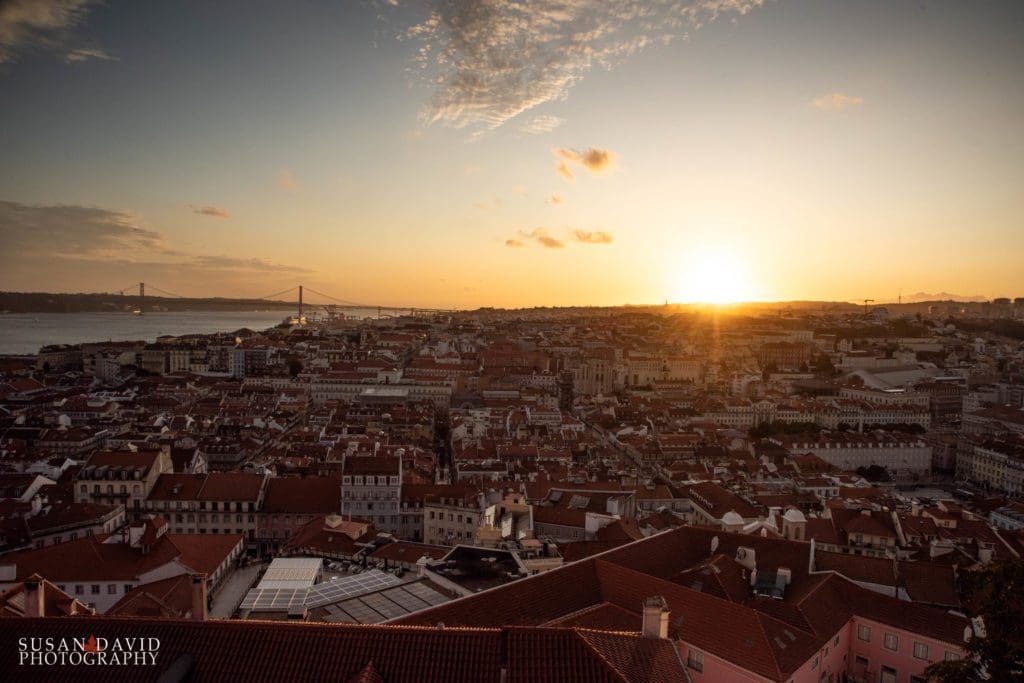 The photo above was taken from the viewing area just inside the castle grounds. While there was still light in the sky I decided to explore more of the castle itself. Inside the castle the glow from the sunset reflected off the walls and made everything pink. 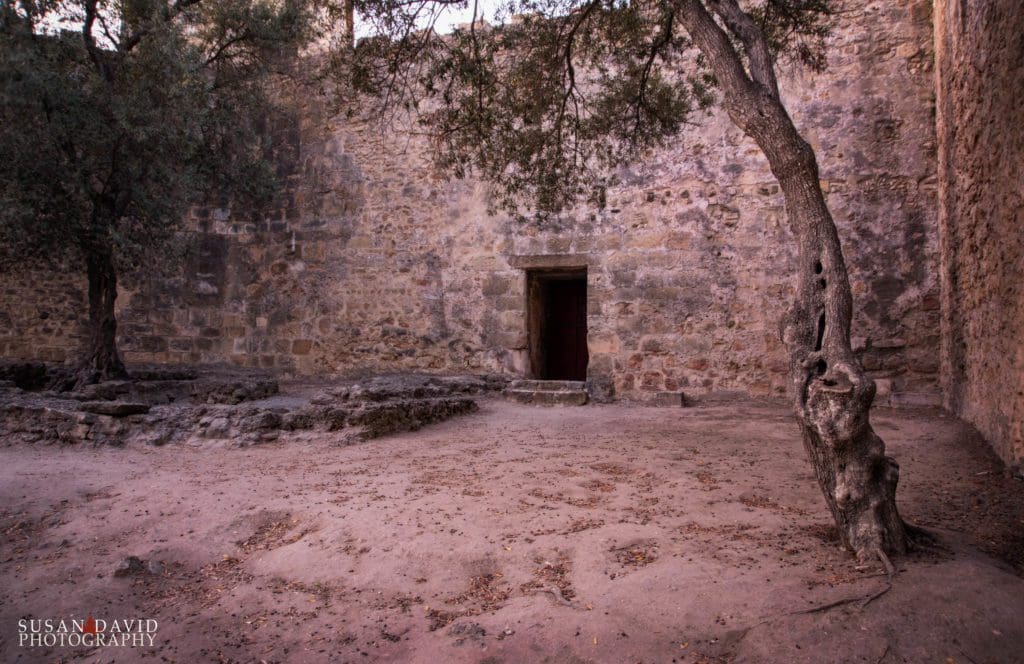 Climbing up to walk on the castle walls I found some beautiful archways to photograph. 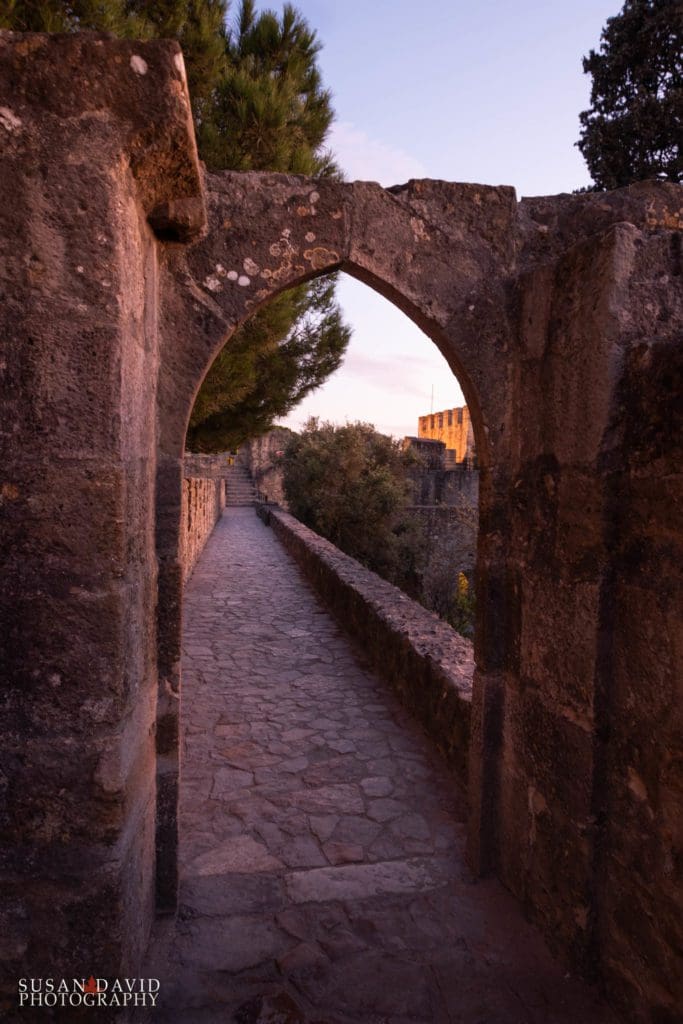 Arch with a View

As night fully descended and the castle grounds were about to close I was able to get one last shot of Lisbon. 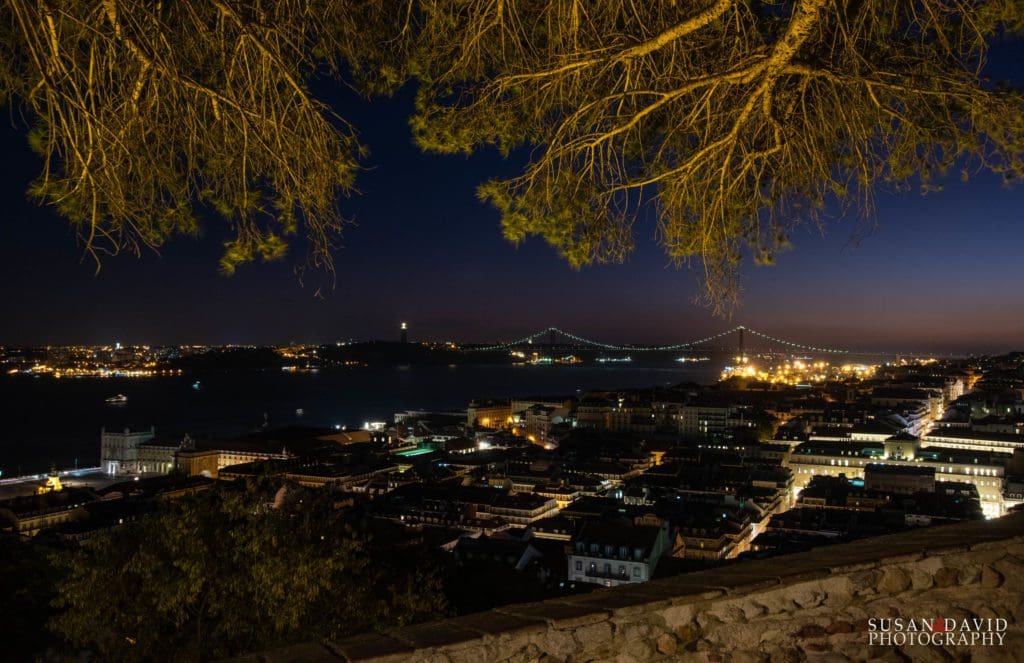 Beyond the Castle Wall

A short adventure today but tomorrow I’ll be getting on a train and heading outside of Lisbon to explore Sintra, the summer playground for the previous kings of Portugal.

Today my cousins took me to Trakošcan castle, which is a couple hours from where I’m staying. Walking from the parking lot the castle sits atop a mountain; a white summer home to those that once lived here. 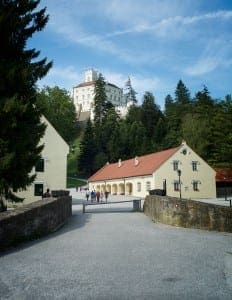 Castle on a hill

The weaving path took us up to the walls of the castle and soon we were discovering the treasures it held. Wandering in and out of the rooms took us through all the different periods of history in all its glory. 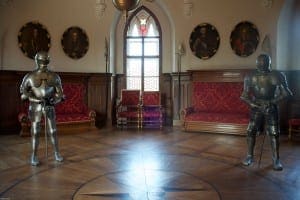 After exploring the castle inside and out we headed to the lake below. We wandered its path to a little area that allowed us to have a picnic in the castle’s shadow. 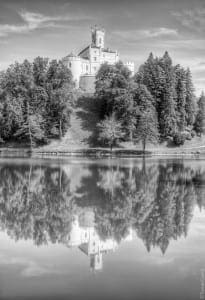 We continued around the lake before finally coming to its end by a floating bar where we partook in some libation. All to soon we were back on the road heading to our next destination – Varaždin.